This seven (7) days itinerary is the best recommended for this route by most of the expert operators including Kilimanjaro Trails. During this trail, the one day hike from Barranco to Barafu is extended into a two (2) days hike offering climbers more time to acclimatize this registering more success rate. This offers a shorter day’s hike the day prior to the summit day offering climbers adequate rest prior to summiting the mountain the next day.

You will be transferred from Moshi town to the gate of the Kilimanjaro National park a drive which will take about fifty (50) minutes. You will drive through Machame village found on the lower mountain slopes. Once at the park headquarters, you will be briefed and then begin the trail walking along a winding trail through the rain-forest to the ridge. Because the trail is muddy and very slippery, we recommend that you use trekking poles and gaiters. You will proceed to the Machame Camp where you will have your meal and spend the night

After breakfast, we leave the glades of the rainforest and continue on an ascending path, crossing the little valley walking along a steep rocky ridge, covered with heather, until the ridge ends. The route now turns west onto a river gorge. Time for rest, dinner, and overnight at the Shira campsite.

After an early breakfast, you will leave the rain forest and ascend crossing through a small valley. The trail will lead you along a steep rocky edge that is covered with heather, and you will follow it all the way to the end of this ridge. You will then head westwards to a river gorge where the Shira campsite is located, and there you will rest, have your evening meal and take your night’s rest.

Starting at the Shira Plateau you will ascend eastwards to the ridge, and go through the junction that heads to the Kibo peak. As you advance you will change directions and move south eastwards to the Lava Tower also known as ‘Shark’s Tooth’ a very impressive rock formation. Not long after there, you will reach another junction, and this takes you to the Arrow Glacier which stands at an elevation of 16,000 feet. You will make the final descent of the day to an altitude of 13,000 feet where you will find the Barranco camp where you will have your evening meal spend the night. Although you complete this day at an almost similar elevation as you began, this day is very important to help acclimatize your body as the summit day draws nearer.

You will have breakfast at the Barranco Camp and then follow the trail along a steep ridge which will pass the Barranco Wall. This trail will take you all the way to the Karanga campsite found in the valley. Today’s hike is very short to offer your body ample time to acclimatize.

An early breakfast will be taken at the Karanga camp, and then you will follow the trail to the junction heading to the Mweka trail before finally reaching the Barafu camp. This is where the southern circuit which offers various views of the mountain summit ends. You will camp here, rest, have your night meal and get an early sleep as you prepare to make it to the summit the following day. At this point you can actually see the Kibo Peak as well as the Mawenzi peak.

You will begin this day’s hike to the summit very early between midnight and 2:00am. You will hike between the Ratzel glacier and the Rebmann glacier, head North West and ascend across the thick gravel to Stella Point at an elevation of 18,600 feet found on the rim of the crater. This section of the trail is the most challenging both physically and mentally.

This is the final day of this 7 Days’ hike on Mt. Kilimanjaro. After your breakfast at Mweka Camp, you will descend to the Mweka- Park Gate where you will be awarded your summit certificates. As you descend along the lower part of the forest trail towards the button of the mountain, you will realize that the terrain is very muddy as slippery. So once again, you will use your trekking poles together with the gaiters. You will continue to walk for approximately one hour until you make it to Mweka village. 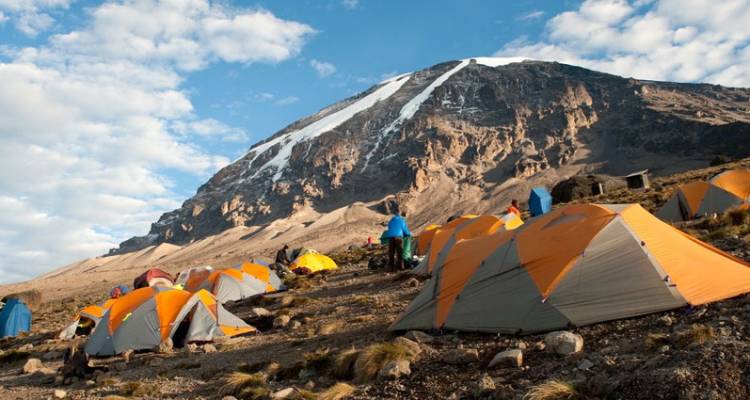